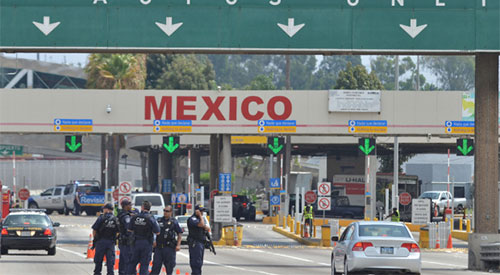 What Happens At The Border With Hazardous Waste Shipments To Mexico? 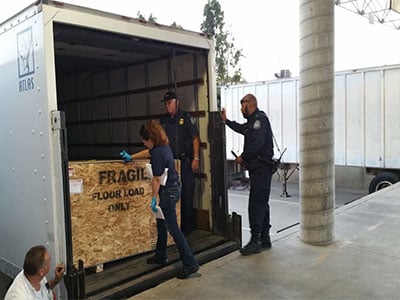 The Hazardous Materials Division (HMD) of the San Diego County Department of Environmental Health (DEH has a contract with the California Department of Toxic Substances Control (DTSC) for the surveillance and inspection of commercial vehicles along the United States-Mexico International Border.

When Temarry Recycling meets with many hazardous waste generators for the first time, many are concerned about whether it is legal to ship hazardous waste streams to Mexico.

There is a perception among many United States companies that Mexico has very relaxed environmental standards. And, that by shipping their waste to Mexico, they will be opening themselves up to a risk that will one day come back to harm their reputation.

Where did this perception come from?

The illegal way ofTransporting Hazardous Waste To Mexico from the United States became a big environmental issue in the early 1990’s. At the time, government officials did not have knowledge of how much waste was transported across the border because enforcement was lax on both sides of the border. There was a lot of negative press at the time, and thus the negative perception was born.

In 1992, the California Environmental Protection Agency in response to this growing issue began a pilot program to perform random checks of trucks crossing the border to get a handle on the problem.

"The aims of this program are to deter the illegal movement of waste . . . and to enable us to become more knowledgeable about the extent of this problem."

Officials have little knowledge of how much hazardous waste is transported across the border because many truck drivers ignore EPA requirements to report the transport of hazardous materials, officials said. Many trucks aren't checked for hazardous materials by customs inspectors, said Gary Stephany, director of environmental health services for San Diego County.

Because the EPA has received few written requests to transport hazardous waste, officials suspect much of it is being illegally transported between the countries, Stephany said. (Source: Los Angeles Times)

This pilot program started the Border Inspection Program that is in place today, which has been very successful, is very thorough and has fostered the coordination of numerous governmental agencies on both sides of the border over the last two decades. Currently, both Northbound and Southbound inspections of hazardous materials/waste transporters are made at the U.S. Customs' ports of entry in Otay Mesa.

Double Inspection at the International Border

When transporting hazardous waste into Mexico, through Temarry Recycling, the waste generator’s liability for that waste ends at the US border.

This is an important distinction!

At the border Temarry Recycling becomes the Principal Responsible Party in the U.S. and Recicladora Temarry de Mexico accepts generator liability in Mexico. This is the grave in the cradle to grave for hazardous waste generators that transport their waste with Temarry.

But what happens to your hazardous waste shipment at the border?

How can a hazardous waste generator be assured that all regulations are followed?

The United States and Mexican agencies have developed a rigorous border inspection to ensure that the environmental laws of both nations are followed.

Here is the border crossing process that Temarry adheres to:

When full trailers arrive at the Temarry yard in Otay Mesa, Temarry personnel prepare each load for export. Preparation of hazardous waste for export can take 1 to 3 days.

Once loads are properly manifested and prepared to cross the border, Temarry trucks get in line to cross the border. This typically takes from 1 – 4 hours to get to U.S. Customs. U.S. Customs reviews all paper work and does a cursory inspection of the load. They either allow the truck to progress to Mexico or re-route to the hazardous materials border yard at the International border. This is a different crossing point than trucks with non-hazardous cargo. If the load is re-routed to this terminal there will be a more thorough inspection. Each load is subject to inspection by DTSC (representing EPA) and CHP (representing DOT).

Both agencies are empowered to enforce state and federal regulations. In addition, U.S. Customs has the authority to inspect and deny export.

Most days are a paperwork inspection by U.S. Customs only. Exporters never know when any of those agencies are going to do a full inspection that may involve off-loading the entire load. Inspection can include matching every container with the correct manifest and taking samples from every container for laboratory analysis.

After clearing the U.S. Customs compound it is through the gate into the Mexican hazardous materials compound. The inspection by Mexican agencies is similar to the U.S. side except that often times there is a long wait in line.

This could be 1-3 hours. Sometimes it involves a paper-work inspection and sometimes a more thorough inspection by the various agencies including PROFEPA, Mexican Customs and SCT. Mexico uses a random checking system that looks like a traffic light. Driver pushes the button and if it comes up green he is free to pass. If it is red, he will be subjected to an inspection that will last for 2-3 hours.

Once the truck clears Mexican Customs it goes straight to Recicladora Temarry in Tecate that takes about 45 minutes.

Waste arrives at the Temarry facility the same day that it is imported. From the point that the waste arrives at the facility, it is just like any other TSDF in the U.S. After acceptance, handling codes are applied in block 19 and signed as received in block 20 of the U.S. manifest. Generator copy of the manifest is returned directly to the generator within 30 days of receipt of the waste by Recicladora Temarry. This completes the written chain of custody Cradle to Grave documentation that all TSDF’s must provide to be in compliance with regulations.

Hazardous waste generators should feel comfortable in this process and understand that when transporting hazardous waste to Mexico with Temarry Recycling, all U.S. and Mexican environmental regulations are followed.

Because of this scrutiny of multiple governmental agencies, the process must be performed in a thorough and professional manner. By exporting hazardous waste to Mexico, the burden of the cradle to grave requirements falls upon the exporter (Temarry) and not the generator (You). This is a responsibility that we take seriously!

You can be rest assured that all the perceived risks of transporting waste to Mexico are minimized by our adherence to this very thorough process.