What Contributes To Carbon Footprint In Manufacturing?

The manufacturing industry is one of the largest contributors to greenhouse gas emissions worldwide.

In fact, in 2017, according to the Environmental Protection Agency, industry accounted for just over 22% of emissions in the United States. These figures make industry the third biggest contributor, just behind electricity (28%) and transportation (29%).

However, the numbers above represent just part of the story.

Although industry is responsible for 22% of emissions, this figure only takes into account direct emissions. When you consider manufacturing companies’ use of electricity and transportation in their operations, it paints a much different picture in regards to the size of carbon footprint a manufacturing company has in the United States.

In fact, when you consider direct and indirect emissions as contributors to carbon footprint, industry's share of emissions rises to nearly 30%. This makes industry the No. 1 source of greenhouse gases of any sector.

This number, or figure, can be calculated by estimating the amount of greenhouse gases that are generated or produced, both directly (such as burning fossil fuels) and indirectly (electricity used to power equipment).

So, what factors go into this calculation? Here are some of the most impactful areas of manufacturing that can cause a company’s carbon footprint to spike.

Most direct emissions produced by manufacturing companies during production come from

However, according to the EPA, about a third of the direct emissions industry is responsible for come from other sources. These include:

Another direct contributor to a manufacturer’s carbon footprint is the means of transportation a company uses in its manufacturing process.

As mentioned, transportation alone is a significant component in the overall amount of greenhouse gases generated in the United States. Emissions primarily come from burning fossil fuels for cars, trucks and other modes of transportation. In fact, more than 90% of fuel used for transportation is petroleum based, according to the EPA. This includes both gasoline and diesel.

How does transportation play a role in industry? Several ways.

For example, company fleets, whether executive cars or trucks on site at manufacturing plants, are among the types of vehicles that produce carbon dioxide emissions.

The transportation of your waste also significantly contributes to your carbon footprint. Currently, many manufacturers in the Western United States ship their waste across the country to cement kilns in Kansas or Arkansas. It’s there that their waste is fuel blended, a common form of open-loop recycling. 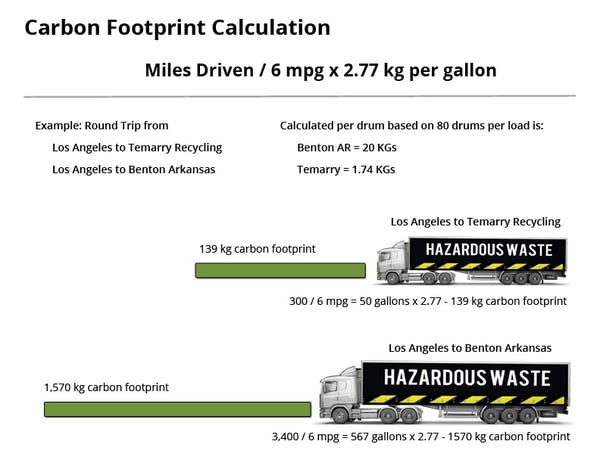 By taking advantage of another option - legally sending hazardous waste streams to Temarry Recycling in Mexico as part of a closed loop recycling system - West Coast companies in particular have found a better way to reduce their emissions and enjoy a host of other benefits.

Purchased energy is an indirect source of emissions for all manufacturing facilities. That’s because 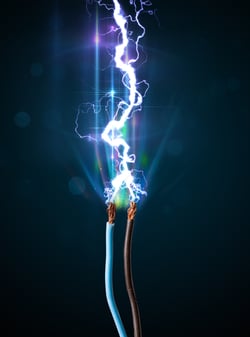 emissions occur when electricity is used to power equipment and other items such as lighting, water heaters and HVAC equipment.

When electricity is used and produced, carbon dioxide emissions make up the vast majority of greenhouse gases, according to the EPA. However, generating electricity also causes methane and nitrous oxide gases to be produced.

The good news for companies: There are many easy ways to conserve energy in any type of setting, whether it’s in the office or on the manufacturing floor.

For example, simply switching out light bulbs, using energy-efficient computers and installing Energy Star appliances can reduce energy demand. Renewable energies, such as electricity that is made from wind and solar sources, are becoming more popular as well. Recently, hydro and biofuel sources in particular have become popular in industry.

Especially in the industrial sector, advanced technologies such as nuclear power and fuels that combust more efficiently also have provided alternatives.

Although the emissions outlined above are examples of carbon footprint contributors you have more control over as a fleet manager or company owner, there are several ways emissions from outside sources can be tied to your carbon footprint.

It’s natural for human activities to include actions such as driving to work or traveling by plane for business opportunities, but these all contribute to the CO2 emissions your company produces.

Another example on the manufacturing scale... An outside contractor that takes raw materials used in the construction of a product from an original location to your factory by truck. Though the truck is not part of your fleet, it is transporting goods related to the production of your product.

Manufacturing companies can help promote sustainability and reducing their carbon footprint by:

Although these may seem like small contributions to reducing a company’s carbon footprint, every effort to reduce emissions in manufacturing makes a significant impact in a company’s sustainability plan.

Many companies are making an effort to introduce more sustainable practices into their business plans, from reducing energy consumption to incorporating more fuel efficient vehicles into their fleets.

Manufacturing companies are also taking a closer look into their waste disposal processes and recycling solutions, and adjusting this area of their operations in order to make a significant impact on their carbon footprints.

As mentioned above, waste transportation can be one of the most impactful parts of a company’s operations when plugging in your company’s consumption of fossil fuels in a carbon footprint calculator.

You can read more about how you can become a sustainable business and reduce your carbon footprint in our article, How Continued Process Evaluation Can Lead To Sustainable Solutions.