The Carbon Footprint Definition And How Waste Generation Plays A Part

Waste generation has an enormous impact on a carbon footprint, but in more ways than one might think.

A carbon footprint is defined as the amount of carbon dioxide and carbon compounds emitted from the direct use of fossil fuels. Every entity has a carbon footprint, whether it is an individual, small business, large company or entire community. It was created to serve as a tool in understanding the impact of personal and corporate behavior and increasing the need for more sustainable practices.

There are many factors that go into determining your carbon footprint, from the way you travel to the products you use. On an industry level, hazardous waste generation and management plays a significant role in a company’s carbon footprint and the level of sustainability a company implements in its practices.

Waste generation is inevitable for every business. However, you may be 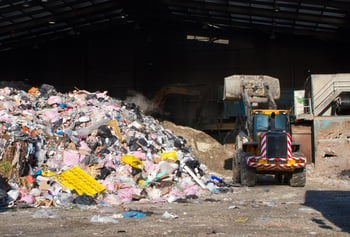 surprised to know just how much waste is generated every year and how that impacts the carbon footprint of an individual or company.

In 2017, the United States was responsible for 267.8 million tons of municipal solid waste. That equates to 4.51 pounds of trash per person per day.

At the landfill, that paints a bleak picture. As trash decomposes, it releases methane, a potent gas responsible for a significant portion of a large carbon footprint. In fact, in 2010, the United States was responsible for the highest amount of methane emissions from landfills at 130 million metric tons.

Landfills designated for hazardous waste can present several dangers to the environment. Before the Resource Conservation and Recovery Act, landfills were filled with a mixture of municipal solid waste and hazardous waste. Old dumps still present a danger for polluting soils and waters nearby.

Today, RCRA requires hazardous waste be disposed of in specially-designated landfills that are sealed off from the environment. However, toxic substances have the potential to release gas into the atmosphere and contaminate water supplies through a leachate process.

If your company generates hazardous waste, you legally must have a plan in place to safely transport that waste off your property for proper disposal.

A major contributor to a company’s carbon footprint is the transportation used for removing that waste. The total amount of greenhouse gas emissions produced primarily comes from burning fossil fuels for trucks and other modes of transportation. According to the U.S. Environmental Protection Agency, more than 90% of fuel used for transportation is petroleum based, including gasoline and diesel.

Many manufacturers transport their hazardous waste across the country to cement kilns in the Midwest to be fuel blended. This open-loop recycling process blends organic waste streams into an alternative fuel for kilns used when manufacturing cement.

Fuel blending is considered to be an environmentally-friendly option for companies that produce solvent-based liquids, solids and sludge.

The problem, however, lies with how these materials are transported to the cement kilns, especially for manufacturers that are located along the West Coast.

As you’ll see in the table below, transporting waste from Los Angeles to one of the nearest cement kilns in Kansas and Arkansas, produces a much greater impact on a company’s carbon footprint than transporting it to a closer facility for recycling.

Without cement kilns located in the Western portion of the United States, what are a company’s options for proper disposal?

In fact, a company’s ability to ship its hazardous waste to Mexico - legally and

safely - is one of the industry’s best kept secrets.

It’s just across the border in Tecate, Mexico, that Temarry Recycling operates a state-of-the-art facility that practices a closed-loop recycling and recovery system. That means waste is collected, recycled and then used again to make the same product - a restorative and regenerative process that keeps materials at their highest utility and value always.

Because of Temarry’s prime location, companies that transport their waste to Mexico not only reduce their hazardous waste transportation costs, they also greatly reduce their total carbon footprint.

Temarry Recycling is also one of the few facilities permitted to handle waste generated in the United States that can recycle flammable liquids for reuse.

As a company, there are actions you can take to reduce your waste and improve your corporate sustainability. Even after putting sustainable practices in place, you will likely still generate waste and possibly hazardous waste depending on your operations.

For companies located in the western United States, shipping hazardous waste streams to Mexico makes sense for reducing your company’s impact on the environment and improving the sustainability of your company - both as a good steward of your community and your long-term financial health.

It is one of the greatest ways you can impact how your company defines its carbon footprint.