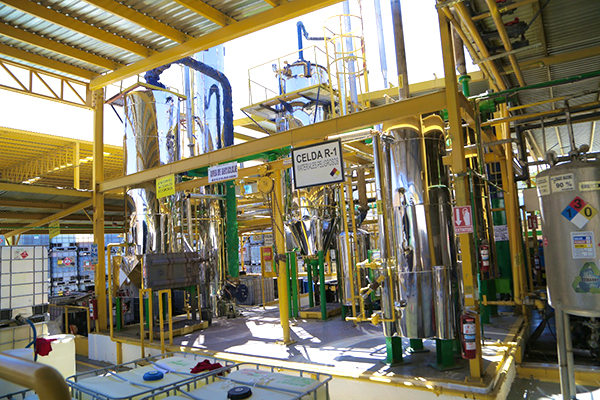 Pouring solvents down the drain may be an easy way to dispose of them, but this act can be a costly mistake for your business.

Many solvents are considered hazardous waste, and with that designation comes a host of regulations you must follow for proper disposal.

What many companies may not realize, however, is that solvent waste still plays a valuable role in industry even when they are spent or no longer can be used. In fact, solvent waste plays a critical role in the circular economy, a viable alternative that manufacturers are exploring as they look for ways to save costs and improve their sustainability.

How Is Solvent Waste Handled?

There are two primary options for a generator to choose from for solvent waste disposal. Fuel Blending is typically directed to a local or Regional TSDF to be mixed and blended to cement kiln specifications. After blending, it goes to the actual cement kiln to be used as an alternative fuel. From the Western U.S., the closest cement kilns are located in Kansas and Arkansas. The other option is to direct the solvent waste to a TSDF that offers a higher level of sustainability as an option. It’s at the latter that a process called solvent distillation occurs.

Industrial solvents are molecules that can dissolve other molecules, known as solutes. A solvent can be a solid, liquid or gas.

In other words, heat or another chemical process must be applied to the solution in order to separate the solvent from the solute. An example of this is solvent distillation.

Through this application and removal of heat, solvent distillation separates a liquid or vapor mixture of two or more substances into its component fractions of desired purity.

This solvent distillation recovery process is based on the fact that the vapor of a boiling mixture is richer in low boil point components. After the vapor cools and condenses, the liquid condensate is ready to be sold back into industry.

Companies that have embraced the recycling of solvent waste have committed to using as few natural resources as possible and keeping what materials and products they do use in circulation. This is central to the principles behind the circular economy.

What Is The Circular Economy?

Currently, many companies operate under a “take-make-waste” approach, which is known as a traditional linear economy business model. This offers many challenges to businesses, however.

What Role Does Solvent Waste Play In The Circular Economy?

At Temarry Recycling, closed loop recycling is a restorative and regenerative process. When a manufacturer’s spent solvents are delivered to Temarry, here’s what happens: 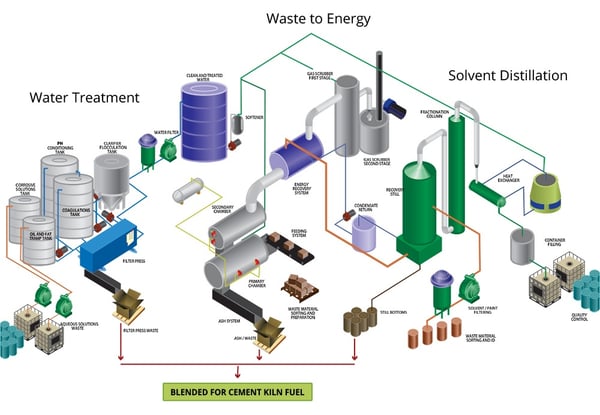 A waste to energy process begins the loop. Organic solids with sufficient BTU are converted to energy in the form of steam. Waste is fed by a conveyor into the primary stage for thermal destruction, followed by a secondary thermal treatment.

Inorganic solids, or ash, from the primary stage are quenched and fall into an ash hopper.

Heat is then directed to a 200-horsepower steam generator. The remaining gases are directed to a modern two-stage venturi scrubber to ensure that only clean water vapor is emitted into the atmosphere.

Using the steam from the waste to energy process as energy to power the recovery stills, spent solvents are re-manufactured. Solvent distillation plays a critical role in completing the loop of a closed loop process.

This process that is an important part of the circular economy when it comes to spent solvents allows solvents to be sold back into industry for their original solvent properties.

Finally, a water treatment process extracts usable water from industrial hazardous wastes. Treated water is then used on-site for industrial needs, including during the waste to energy process and in the cooling tower.

Why The Circular Economy?

When manufacturing facilities are faced with the decision of how to handle the solvent waste they produce, they often evaluate factors such as cost, liability and how a particular process fits into their sustainability initiatives.

Those that take advantage of the closed loop recycling system at Temarry Recycling often realize several benefits. Here are a few:

Becoming a top circular economy company and experiencing economic growth involves analyzing which processes can provide the benefits outlined above. If your company produces solvent waste, embracing the circular economy model and taking advantage of solvent distillation and closed loop recycling will help lay a more secure foundation for the future of your company.