How To Ensure The Safe Handling Of Flammable Liquids

The safe handling of flammable liquids is critically important to maintaining a protected work environment in your facility.

One mistake can be catastrophic, as was the case in 2020 when a West Virginia chemical facility erupted into flames after a 1,200-gallon metal dryer became over-pressurized. The blast killed one worker and injured three others.

The safe handling of disposal of flammable liquids is far from easy. While there are guidelines and rules put into place for every substance, there are several additional factors that must be considered as well when securing a flammable liquid. These include container types, ignition sources and more.

To avoid the risk of explosion and ensure the safety of your workers, here are some tips to keep in mind when handling flammable liquids.

When handling a flammable liquid, it’s important for workers to be aware of that liquid’s flashpoint. A flashpoint is “the lowest temperature at which a substance generates a sufficient amount of vapor to form a vapor or air mixture that can be ignited,” according to the National Fire Protection Association (NFPA).

For example, ethanol’s flashpoint is between 52 and 54 degrees F. Diesel, on the other hand, has a much higher flashpoint of up to 125 degrees F. These very different flashpoints can impact how workers handle each liquid.

Keep Away From Possible Ignition Sources 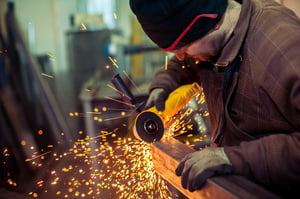 Keep flammable liquid containers properly sealed to avoid vapors being released. When this occurs, volatile compounds can be released into the air, which are also capable of catching a spark and igniting.

A container is important not only for storage of flammable liquids but for transport as well. Following simple best practices, such as the following, can keep a space safe when handling flammable liquids.

When handling flammable liquids and moving them to another location in your facility, your workers are subject to additional dangers. Simply the act of moving hazardous materials can be dangerous since static electricity can cause sparks, which then become an ignition source for volatile chemicals.

Create documentation for emergency responders and so you can refer back to it in the event of a mishap.

When transferring a chemical to a storage room, ensure that the storage area is safe and meets all regulations. In fact, most regulations require that companies keep flammable liquids in fire-proof storage cabinets. These cabinets must also feature other safety components, such as joints that are riveted, welded or tightened effectively, and a double walled construction that includes 1.5 inches of airspace.

When handling the chemical and placing it inside a cabinet, ensure that the container is tightly sealed to prevent any leaks or reactions with the air. Ensure that the storage cabinet meets any temperature guidelines as well.

Get Help To Reduce Risks

Keeping flammable liquids onsite that are no longer needed can be an invitation for an accident to occur. For companies that regularly use hazardous waste like flammable liquids, it’s important to have a partner who can both accept your waste and enhance your sustainability goals.

Temarry Recycling will recycle your solvents at its distillation facility through our closed loop recycling process. Here’s how it works:

In addition to serving as a destination for your flammable liquids, Temarry’s recycling facilities offer a company several additional benefits as well.

Companies enhance their sustainability plans by preserving more resources. This helps ensure companies are less likely to rely on natural resources in the future.

West Coast companies decrease transportation costs. Some companies transport their flammable waste across the country to states like Kansas and Arkansas where fuel blending facilities are located. Temarry, on the other hand, has a Treatment, Storage and Disposal Facility located just across the U.S.-Mexico border.

The proximity of this TSDF also reduces a company’s carbon footprint. Less fuel is needed for transportation.

While the safe handling of flammable liquids often focuses on best practices inside a facility, choosing the right destination for your waste also plays a significant role in securing a safe future for the environment and your business.