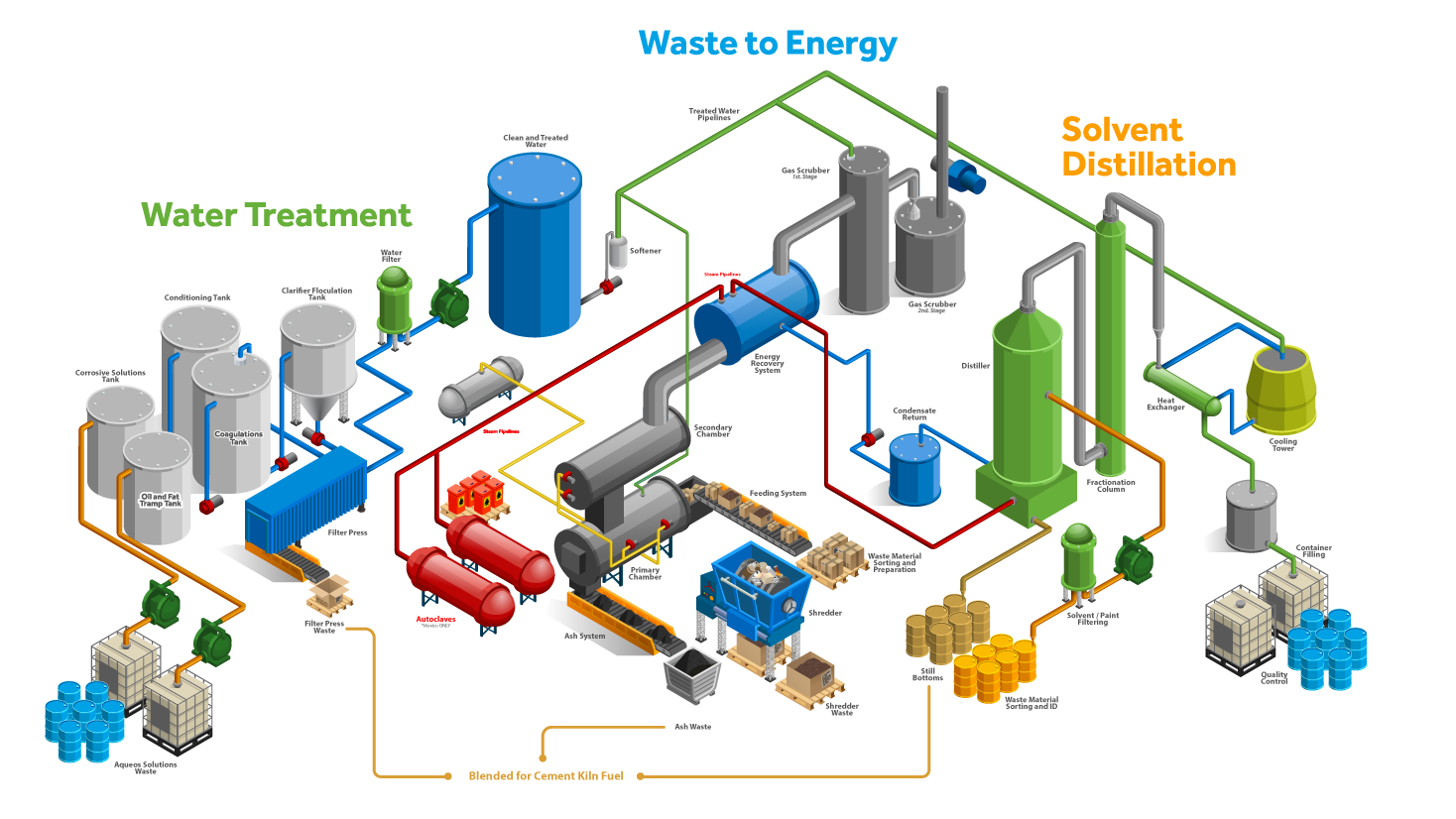 At a time when industrial and environmental regulations are constantly in flux, protecting your company and incorporating the highest level of sustainability into your corporate goals, is not only socially responsible but just good business in today’s environment.

A solvent recycling system is the preferred disposal method among many industrial manufacturers since it minimizes adverse environmental effects and provides a cost-effective disposal solution. Distillation is the most common method of solvent recycling.

How does it work?

A solvent is a molecule that has the ability to dissolve other molecules, known as solutes. A solvent can be solid, liquid or gas. The molecules of the solvent work to pull the solute molecules apart.

Eventually, these molecules become evenly distributed throughout the solvent, creating a perfectly even homogenous mixture that cannot be separated physically unless heat or another chemical process is applied to the solution.

Here’s where solvent distillation is applied.

Solvent distillation is a process by which a liquid or vapor mixture of two or more substances is separated into its component fractions of desired purity, by the application and removal of heat.

Below we’ll explore the benefits this system provides manufacturers so that you can better assess whether solvent distillation can help you meet your company’s corporate sustainability and fiscal goals.

When waste solvents are received, they are sorted and undergo a solvent waste fingerprint analysis to identify the solvent.

Liquid drums are pumped and filtered, and solvents are pumped into the distillation unit. After this occurs, volatilized solvent vapors expand into a fractionation column, which is followed by a cooling period before being directed to a finished product tank.

The product is then pumped into drums and totes for distribution back into industry.

Solvent Distillation Recovery is based on the fact that the vapor of a boiling mixture will be richer in low boil point components such as acetones, ketones, aliphatic hydrocarbons and alcohols. When the vapor is cooled and condensed, the liquid condensate becomes a valuable product that can be sold back into the industrial marketplace.

The higher boiling point portion of the original mixture that does not vaporize remains at the bottom of the recovery still. This non-vaporized distillation residue is collected and recycled as an alternative fuel source.

Many Solvents Can Be Recycled Using This System

One of the biggest benefits of solvent distillation is the fact that many solvents can be recycled, reprocessed and then reused using this system. This allows many different types of manufacturers to take advantage of this process.

The most commonly recycled solvents are:

Our eBook, Acceptable Waste Codes Guide, further provides a complete list of acceptable waste codes Temarry receives to give you a better idea of whether your facility can take advantage of solvent distillation.

Solvent Distillation Can Be Part Of The Circular Economy

In many disposal facilities, waste is received and then treated according to its properties.

However, at Temarry Recycling, nothing is wasted.

By creating a marriage between solvent distillation and waste to energy, a Closed Loop Recycling system is formed. 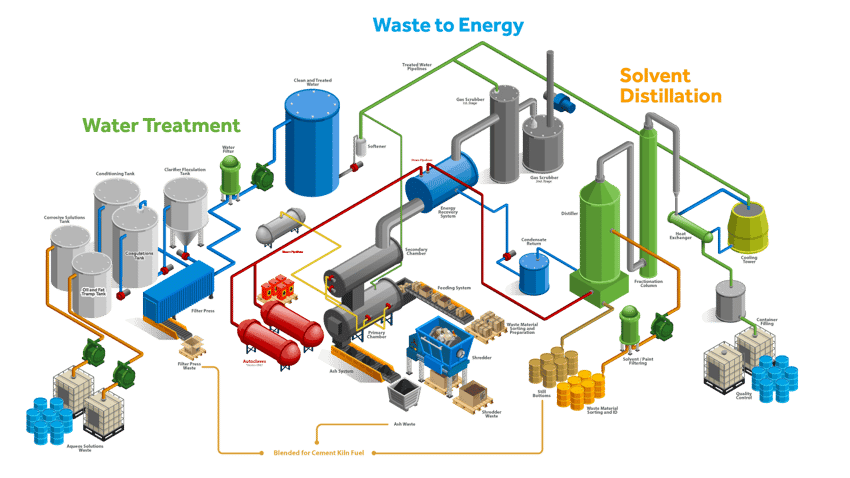 This type of closed-loop system allows for received waste to be treated and then turned back into a reusable product. That’s because solid wastes we receive are thermally treated at 1500 degrees F to generate steam that is used to power our solvent recovery systems.

This closed-loop system provides many more benefits than an open-loop system, which typically results in materials being recycled and used differently from their original purpose. Closed-loop recycling, on the other hand, is restorative and regenerative by design. It aims to keep materials at their highest utility and value always.

Solvent distillation plays an important role in reducing hazardous waste when it’s part of a true closed-loop recycling system, especially for industries that have a need for recycled solvents.

Your Carbon Footprint Is Reduced

As sustainable corporate mandates make their way down the corporate ladder to the employees that implement them, the task of reducing the companies overall carbon footprint may seem a complex one.

However, for companies located in the western United States sending their solvent waste streams to Temarry can markedly reduce their carbon footprint. 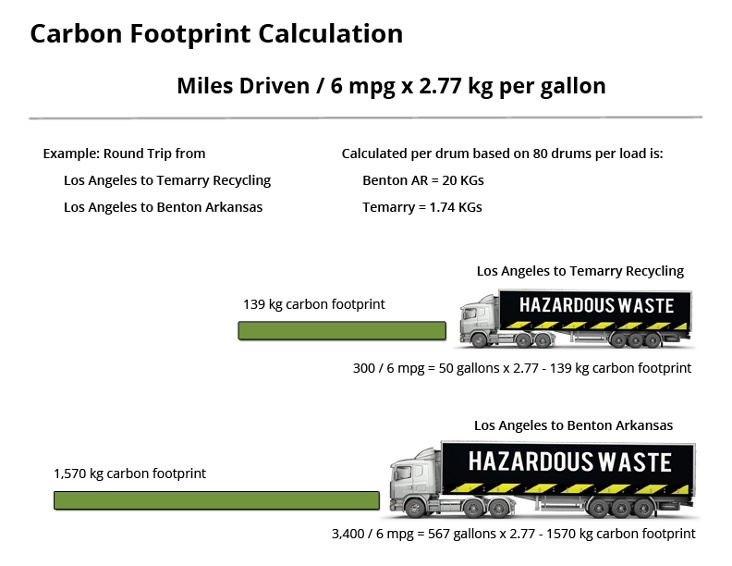 Temarry is the only closed-loop recycling facility serving the western United States.

This means you’ll immediately see a reduction in transport distance of the waste stream … reducing your carbon footprint tremendously, while at the same time, saving you money in disposal costs.

In today’s industry, properly following state and federal regulations is critical to your business. By using a solvent distillation system to help you with your hazardous waste management, you can achieve higher sustainability and corporate responsibility.

However, by taking advantage of what a solvent distillation system offers in connection with a true closed loop system, like through Temarry Recycling, you can also reduce your cradle to grave liability.

Temarry is an EPA-authorized exporter of hazardous waste. Once your waste stream crosses the border, your liability for the waste stream ends.

You can read more about how cradle to grave requirements impact U.S.-based hazardous waste manufacturers and the benefits of utilizing a recycling facility in close proximity to West Coast companies in our article, Where Does Your Cradle To Grave Liability End?