Are You Recycling or Fuel Blending?

When an unwanted byproduct that is created from a manufacturing or other process, the recycling goal is to keep that product being used for its intended purpose.

A simplified explanation would be…if you typically only print on one side of a sheet of paper and then dispose of it in a container that is destined for landfill, you have ended the usable life of that sheet of the paper.

The disposal of this byproduct now becomes an issue. Sending the acetone across the United States for H061 fuel blending generates a huge carbon footprint and misses a true recycling opportunity. 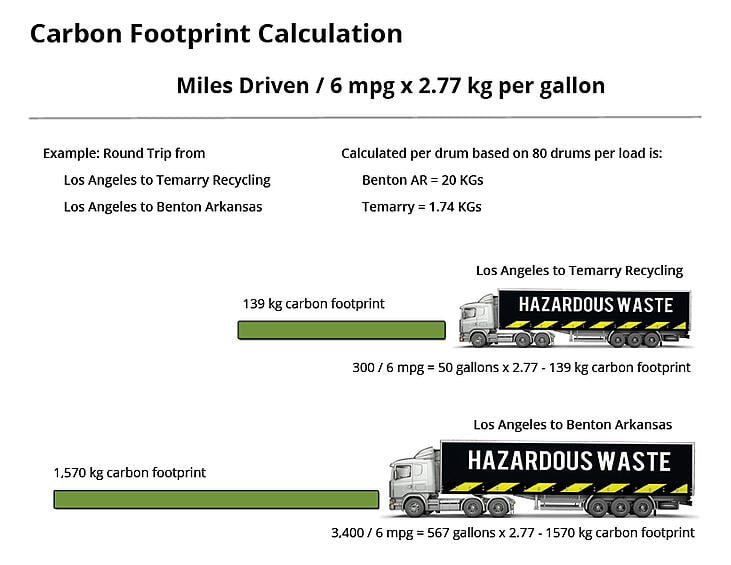 If instead, you recycle the acetone by distillation, the acetone goes back into industry for its intended purpose.

Distillation generates a secondary byproduct referred to as still bottoms. Still bottoms are a mixture of the contaminants that were in the acetone along with a small amount of acetone. The mixture still has very high BTU and is a valuable source of fuel for energy recovery.

It is only after recycling that energy recovery should be employed to achieve the highest level of efficiency. Energy recovery seeks to extract the available BTU or heat value from the unwanted byproduct and use the heat value to derive an immediate benefit.

As is the case with Temarry Recycling, the immediate benefit is the production of steam that is used to power their recovery stills. Using steam instead of propane or natural gas provides a cost benefit, but also prevents the extensive use of a natural resource.

Both types of recycling are good. Recycle first and then recover energy. If the process of recycling is not a viable option for items such as rags and debris, since there is no liquid to recover, then going straight to energy recovery is the best option.

Why should it matter to the average individual or business enterprise?

In some parts of the U.S., and within some corporations, there is a mandate to reduce the carbon footprint and reduce the amount of raw materials consumed in order to sustain the availability of natural resources. Natural resources have a finite quantity. When they are gone, they’re gone. By recycling whenever practical, resources are sustained. By conserving our natural resources we as a people all benefit.

At Temarry, we recycle or recover everything that we receive.

We have a complete list of the acceptable waste codes Temarry accepts.

We accept flammable and halogenated solvents for distillation. Spent solvents are first filtered and blended and then go into the recovery stills. Sufficient heat is applied to boil the solvent. Only the pure solvent is vaporized and goes up into the column. The vapor is condensed back into liquid where it becomes a pure solvent that is sold back into industry to be used for its intended purpose. This is “True Recycling”. 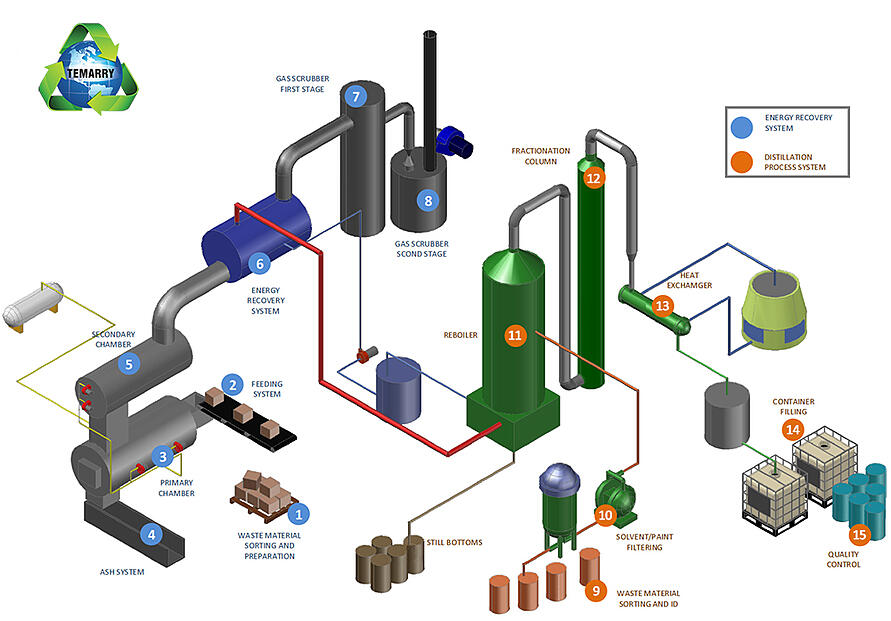 Heat is a natural resource that is expensive and can often mitigate the financial advantage of distillation. At Temarry, we receive hazardous and non-hazardous organic solids, such as rags, debris, wipes and PPE with sufficient fuel value to convert to energy. Solids are fed by conveyor into the primary chamber that operates at 1500°F.

Heat and gases then go into a second chamber that operates at the same temperature to insure that all organics are eliminated. Heat then goes to a 200 hp steam boiler. Effluent is then directed to a 2 stage venturi scrubber to insure that particulate does not enter the atmosphere. Steam is then directed to the recovery stills and used as an inexpensive heat source that does not expend natural resources.